Triangle Park has historically been a part of the Defiance City Schools property donated by the Latty and Holgate families back in the 1860’s.  The park serves as a focal point to the downtown and has always been a popular gathering place.  At one time the local G.A.R. placed a soldier monument in the park as tribute to their fallen friends from the Civil War.  That monument was moved in the 1960’s to Riverside Cemetery to the center of the older veterans’ section there.  The soldier was once flanked by Civil War Era cannons which were moved, also in the 1960’s, to the Fort Grounds next to the Public Library.  Currently the park is home to concerts and picnics and is a popular meet up spot for bicyclists in or passing through the area.  In 2025, Historic Homes of Defiance and the Defiance Development and Tourism Bureau placed an air pump at the east side of the park for bicycle use.  In 2014, Historic Homes of Defiance spearheaded a community effort to build a town clock at the point of the park.

COVID-19 has brought a temporary halt to organized activities at Triangle Park. 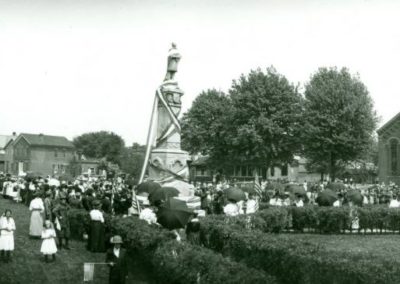